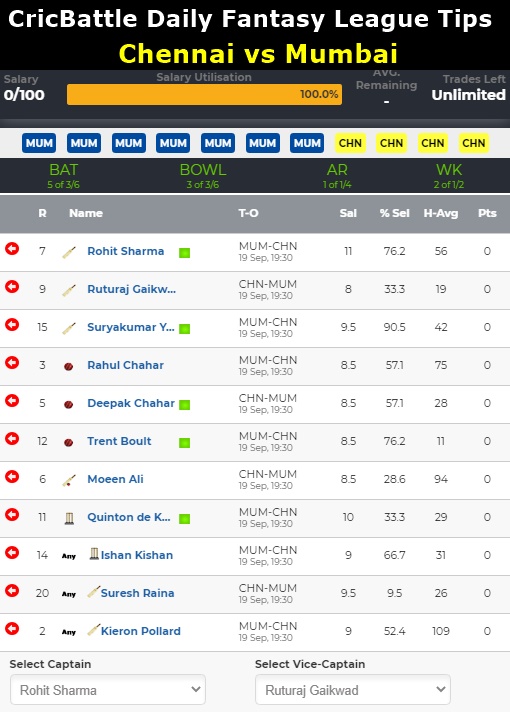 Chennai vs Mumbai on September 19

The second leg of the IPL is all set to commence from September 19 in the UAE. Chennai Super Kings will battle it out against arch-rivals Mumbai Indians to resume the IPL 2021. The three-time champions Chennai Super Kings had a forgettable campaign in the UAE last season as they failed to qualify for the playoff for the first time. However, they roared back to their best as the tournament returned to India and are sitting second on the table on the back of five wins in seven games before the pandemic halted the tournament. Mumbai Indians, on the other hand, find themselves in 4th place, with four wins and three defeats in seven outings. They won their last two games before the suspension and will be aiming to starts off from where they left.

Best economical pick – Chennai Super Kings has effectively used England all-rounder Moeen Ali like no other franchise in the league. Moeen Ali turned out to be the trump card for MS Dhoni in the first phase of the IPL as he performed with both bat and ball. Coming to bat at number 3, Ali smashed 206 runs in 6 innings at an average of 34.33 and a strike rate of 157.25. With the ball, he picked 5 wickets in 6 innings at an economy of 6.16.

Top captains & vice captains – Mumbai Indians skipper Rohit Sharma looked in fine form in the IPL phase 1. In 7 games, Hitman scored 250 runs at an average of 35.71, including a fifty. Moreover, Rohit Sharma averages 28.92 against Chennai Super Kings. He has featured in 29 games against MS Dhoni-led Chennai Super Kings and has amassed 752 runs at an average of 28.92, including 7 fifties. He looked in good touch in the red-ball cricket against England and is likely to continue his fine form. Ruturaj Gaikwad has booked a spot for him at top of the innings and is now the first-choice opener for Chennai Super Kings since Shane Watson’s retirement. Gaikwad made a name after scoring three half-centuries in the IPL 2020 after the three-time champions failed to book a spot in the playoffs. In 2021, Gaikwad has scored 196 runs in 7 innings at an average of 28.00, including two fifties.

Smart pick – Rahul Chahar has been in the Mumbai Indians set up for some time now. He has earned a spot in the playing 11 on the back of his effective leg-break and will be a crucial pick in your fantasy team. He picked up 11 wickets in 7 innings in phase 1 of the IPL 2021 and will be aiming to replicate the same in the remainder of the tournament.

Cautious Pick – English all-rounder Sam Curran has just reached the UAE for the tournament. But CSK will miss his services in the opening game. Curran will have to undergo the six-day mandatory quarantine. Thus, he would not be able to take the charge of the field for the game against Mumbai Indians. Curran has been a pivotal aspect of the team and his contributions will be crucial for CSK to continue their good form in the second leg of the IPL.