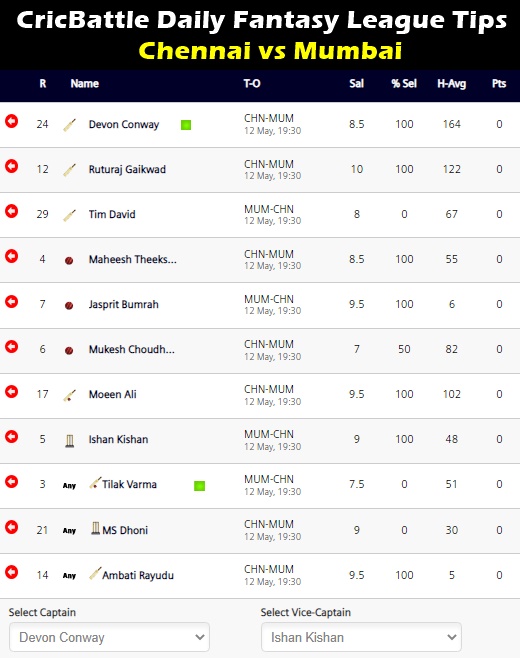 Chennai vs Mumbai on May 12

The Chennai Super Kings are all set to take on the Mumbai Indians in their next encounter at the Wankhede Stadium. The MS Dhoni-led side managed to produce a scintillating performance against the Delhi Capitals in their previous game and have still kept their hopes alive in the tournament. With four wins in 11 games, CSK are currently at the ninth position in the points table. Mumbai Indians, on the other hand, are coming off a big loss against the Kolkata Knight Riders, and with two just two wins, the franchise are already out of the race for the playoffs. The Rohit Sharma-led side will be looking to end the remaining games on a high and they are likely to make changes as well. Suryakumar Yadav is out of the tournament with an injury. Dewald Brewis is expected to be back in the XI at the expense of Ramandeep Singh.

Best economical pick – Maheesh Theekshana has been picking up wickets regularly for the Chennai Super Kings and he has been improving in each game. The Sri Lankan spinner finished with 1 for 29 in the previous game against Delhi Capitals and e has been quite economical in any phase of the game.

Top captains & vice captains – Devon Conway played yet another sensational knock in the previous game against the Delhi Capitals and got his side to a match winning total. The left-hander scored a 49-ball 87 and he has been among the runs in the last three games for the CSK side in their turn around. The New Zealander will be looking to ensure his form continues throughout the remaining fixtures. Ishan Kishan played a good knock of 51 runs in the previous match. In 11 matches so far, Kishan has piled up 321 runs at an average of 32.10. He has also shattered 3 fifties. Ishan Kishan will also keep the stumps for the team.

Smart pick – Ruturaj Gaikwad has scored good knocks in the last few games. In the previous match, he scored 41 runs. In 11 matches so far, he has scored 306 runs at an average of 27.31 and hit 2 fifties.

Cautious Pick – 11 matches so far, Rohit Sharma has scored 200 runs at an average of 18.18 and a strike rate of 125. You can avoid him in your fantasy team for this match.