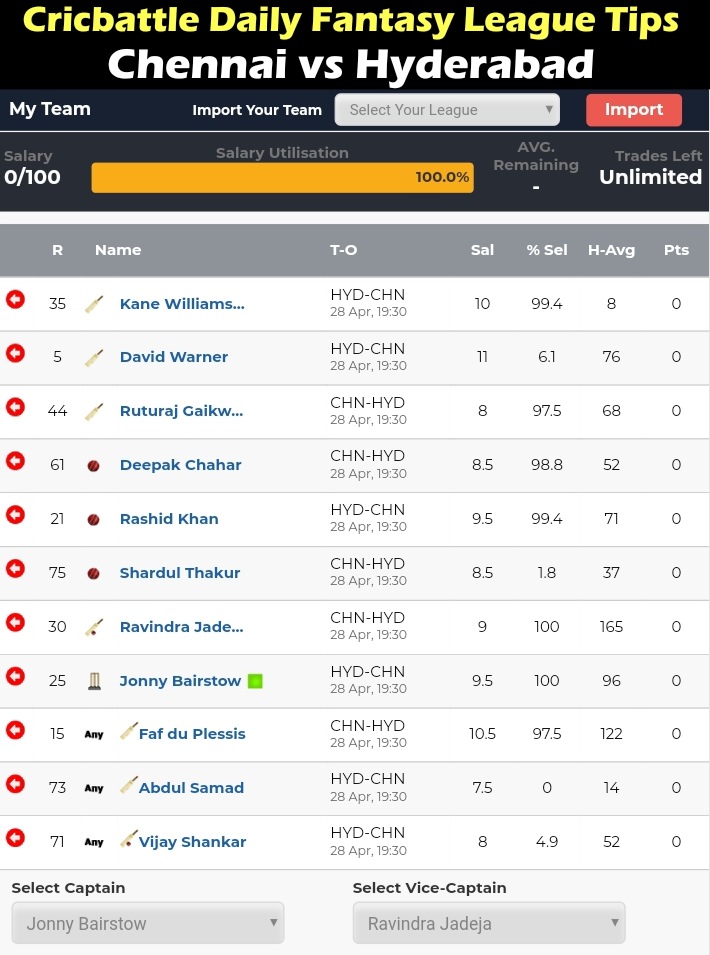 CricBattle Daily Fantasy Cricket League Tips
Chennai  vs Hyderabad on April 28
Chennai Super Kings (CSK), after an indifferent start, have found their feet in the 2021 edition of the Indian Premier League (IPL). The MS Dhoni-led unit has won four games in a row and is among the table-toppers in the championship.In their previous game, the Yellow Army beat Royal Challengers Bangalore (RCB) by 69 runs at the Wankhede Stadium, Mumbai after Ravindra Jadeja’s 37-run over. The Super Kings are next set to face the Sunrisers Hyderabad (SRH) on Wednesday, April 28 at the Arun Jaitley Stadium in New Delhi. As far as the Orange Army is concerned, they lost to the Delhi Capitals (DC) in their last game after the match went to the Super Over. Languishing at the bottom of the points table, David Warner and Co would be hoping to secure a win and climb the ladder.
Best economical pick – Deepak Chahar had a rough day in the office against the Challengers, but he remains CSK’s leading wicket-taker in the tournament with eight scalps from five games. He has bowled exceptionally in the powerplay thus far. In 31 overs against the Sunrisers, Chahar has picked up nine wickets with best figures of three for 15. The speedster has also managed a frugal economy rate of 7.66.
Top captains & vice captains –Jonny Bairstow has scored 211 runs in 5 innings so far at an average of 52.75 and is the current leading run-scorer for his team. He will be a valuable asset for the side as he can also fetch a few handy points with the gloves. Ravindra Jadeja showed his all-round abilities in the previous game against Royal Challengers Bangalore wherein he stacked a terrific half-century with the bat and then grabbed 3 wickets with the ball, he has scored 102 runs and has also picked 5 wickets in the tournament so far.
Smart pick – Kane Williamson has looked in great rhythm in the ongoing league. In two games, he has scored 82 runs with a top score of an unbeaten 66. Most importantly, he is yet to be dismissed. Against the Super Kings, the Tauranga-born has done decently as well. In eight games, Williamson has racked up 301 runs at an average and strike-rate of 43 and 139.35 respectively with three half-centuries.
Cautious Pick – Bhuvneshwar Kumar, in this tournament so far, hasn’t looked like the bowler he is. He bowled a few expensive spells in the first few matches.
My XI – Jonny Bairstow (Captain), Ravindra Jadeja (Vice-Captain), Kane Williamson, Deepak Chahar, David Warner, Faf du Plessis, Rashid Khan, Shardul Thakur, Rituraj Gaikwad, Abdul Samad, Vijay Shankar
Blog Comments

Testimonials
Rassie van der Dussen has joined the team but he is yet to complete his quarantine. Are you guys adding him?Anish Reddy
I was a regular player. But Tamil Nadu Govt have banned online games.Whether this comes under online games Or not. Please clarify.Shankar Raman
View all