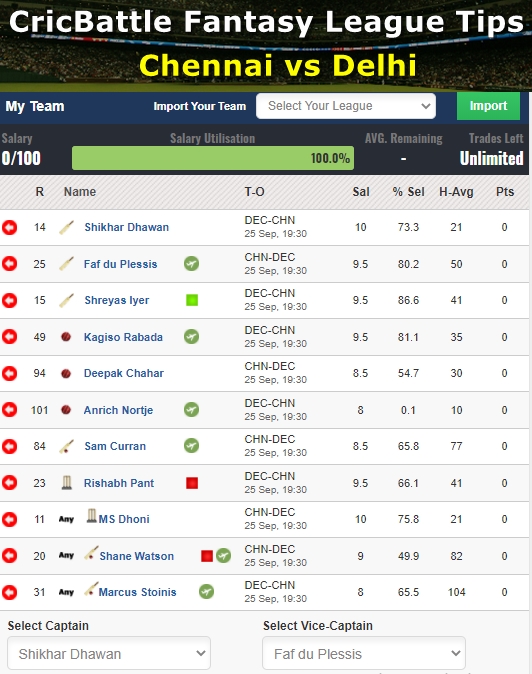 Chennai vs Delhi on September 25

It's the battle between youth and experience, as the Delhi Capitals are set to take on the Chennai Super Kings in their next game of the IPL. With the Capitals having gotten away with a narrow win against the Kings XI Punjab, they will use the result to fuel their confidence against the Super Kings. CSK, on the other hand, have just been handed a loss by the Rajasthan Royals. The game between the finalists of the inaugural IPL did not end well for the Super Kings, as they fell 16 runs short of the total posted by the Royals. While the MS Dhoni-led squad isn't in any trouble, their previous game did bring to light certain things that the team need to fix.

Best economical pick – Rising all-rounder Sam Curran has already proved himself to some extent for CSK. In the inaugural fixture, he played a match-winning knock and also played a little came in the second game. Curran will be key with the bat and ball for CSK throughout the tournament and he will add energetic approach to the side.

Top captains & vice captains – Shikhar Dhawan didn’t have a great game against KXIP, but his numbers against CSK aren’t worth dismissing. In 21 matches, the left-hander has 641 runs at an average of 35.61 at a strike-rate of 122.56. Moreover, Dhawan has as many as six fifties with a top score of 79. After failing in the opening match, Dhawan would be keen to make amends and get some runs in his kitty. Faf du Plessis has looked in form for CSK in the IPL 2020. He has shown his brilliance with two splendid knocks. But the concern for the Chennai franchise will be that they are highly dependent on the South African and if on a day, he doesn’t works then CSK might face a big problem.

Smart pick – Shreyas Iyer was the second-highest run-scorer for the Delhi Capitals against Kings XI Punjab. Shreyas Iyer shared a stand of 73 for the fifth wicket along with Rishabh Pant after the opposition struck three early blows. Iyer’s 39 put the Capitals’ innings on track; however, he lost his wicket when looking to cut loose.

Cautious Pick – When Murali Vijay first played for CSK, he impressed everyone with his classy stroke-play and managed to send the ball to the fence with ease. The same, however, cannot be said about the Tamil Nadu batsman in recent times. He has not had a good IPL season in a long time, and the team management will surely be watching. Vijay's homecoming has not panned out too well so far, as he has only managed a meager 22 runs off of 29 deliveries in the 2 matches played.