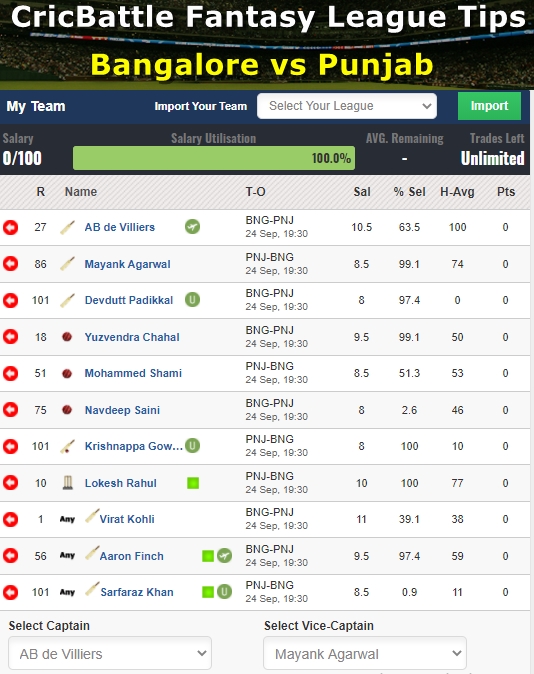 Bangalore vs Punjab on September 24

Bangalore and Punjab will be playing their second match of their campaign and are well aware of the conditions in Dubai. Bangalore may have won their first match but that didn’t end their fans’ concerns about their team selection and specifically their death bowling options. However, it was a good first game for them with the bat as debutant Devdutt Padikkal scored fifty in debut match. Chahal and Saini came to the rescue at the right time and finished the game with the ball. They will be looking to carry the momentum and make it two in a row in Dubai.  On the other side, Punjab lost their first match from the barest of all margins with little bit of luck, going against them. They pulled a dead game back with the help of an outstanding 89 from Mayank Agarwal needing only one from three balls. But they messed it up as they didn’t score anything and lost two wickets off last two balls which led to a defeat in the super over. They will be hopeful to bounce back in this match and gain some confidence to change their fortunes this season.

Best economical pick – Devdutt Padikkal displayed why he is one of the highly-rated youngsters in the Indian domestic circuit as he enthralled the folklore with a whirlwind 42-ball 56 in his debut game against Sunrisers Hyderabad. He became the first Indian in 10 years to score a 50 on IPL debut.

Top captains & vice captains – AB de Villiers has second most runs in this fixture with 662 runs at a SR of 165.91. He is coming off scoring a half century in 30 balls in the first game in Dubai and once again will be very crucial in the finishing role for his team. AB de Villiers played a superb knock of 82 at a SR of 186 in his last outing against Punjab. Mayank Agarwal was the lone warrior in the last match against Delhi. Their batting line-up collapsed in the worst scenario and Agarwal was the only one who played according to conditions and superbly paced the innings. Well he will be crucial in this game as they will be playing in the same conditions in Dubai.

Smart pick – Yuzvendra Chahal’s magical spell of 4-0-18-3 is the major reason behind RCB getting off to a winning start to their IPL campaign. He put on a masterclass of spin bowling in the last game as he consistently played on the batsmen’s patience before either enticing them for a big shot or bamboozling their stumps with his variations.

Cautious Pick – Chris Morris is down with a side strain and will not be available for this match. He also missed his side’s opening fixture against Sunrisers Hyderabad.