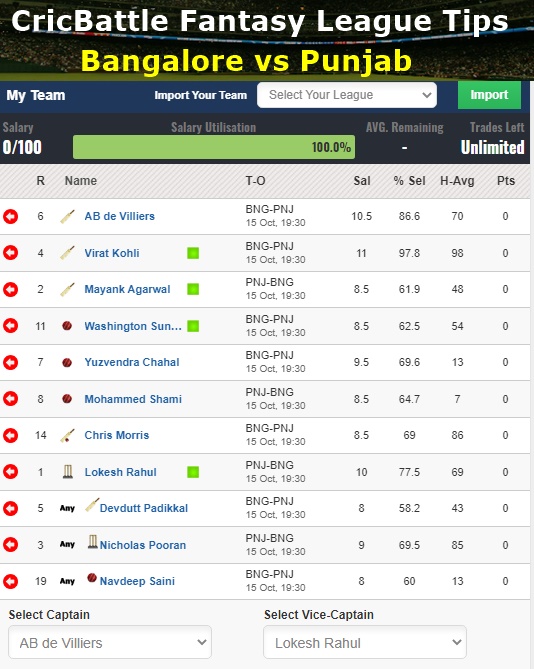 Bangalore vs Punjab on October 15

In their previous meeting, Kings XI Punjab thumped the Royal Challengers by 97 runs at the Dubai International Cricket Stadium. However, their fortunes have turned around drastically in the 2020 edition of the Indian Premier League. For Virat Kohli’s Challengers, they have won five out of their first seven games and are sitting at the third position of the points table in the event. They are also coming off an 82-run win over the Kolkata Knight Riders. KXIP, on the other hand, have lost six out of their seven games and are tottering at the bottom of the points table. They could easily have beaten KKR in their last game, but a batting collapse led to their demise. Going to their next game against RCB in Sharjah, on Thursday, October 15, KXIP will have to pull their socks up.

Best economical pick – Devdutt Padikkal has taken off the burden from Virat Kohli and AB de Villiers to score runs. In just the last seven matches, he has registered three-half centuries and maintained a healthy strike rate of  126.56. Overall, he has scored 243 runs. If the youngster remains consistent and always gives a good start to the team, RCB will always have a good score on the board.

Top captains & vice captains – Ab de Villiers in riveting form, especially after his unbeaten 73 against KKR at the same venue. He has decent numbers against KXIP as well. In 20 innings, the 36-year-old has 708 runs at an average and strike-rate of 50.57 and 160.54 respectively. He also has seven fifties with a top score of 89*. In their previous face-off, the Pretoria-born batsman managed to get a start, but couldn’t carry on. RCB would be pretty aware of what KL Rahul did to them in their previous meeting. His unbeaten 132 mauled the Challengers. Virat Kohli dropped him twice during the knock. He played until the very end. Overall, his numbers are worth envying. In seven innings, Rahul has 310 runs at an average and strike-rate of 62 and 163.16 respectively. The KXIP captain is again expected to be a force to reckon with.

Smart pick – Mayank Agarwal is second in the race for Orange Cap with 337 runs under his belt. Mayank Agarwal scored 56 against Kolkata Knight Riders in Abu Dhabi and was the aggressor in the 115-run opening stand with KL Rahul. The right-handed batsman mustered those runs off 39 deliveries that contained six fours and a maximum.

Cautious Pick – Aaron Finch has played decent knocks but is yet to play a big knock. He has scored 171 runs in seven matches at the strike rate of 114.00.