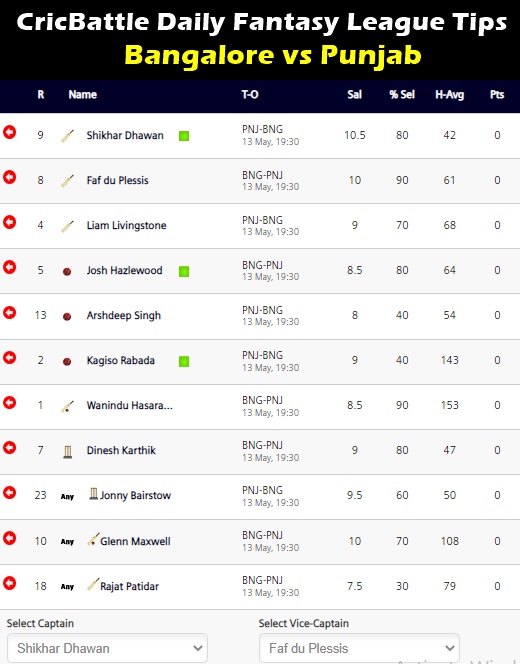 Bangalore vs Punjab on May 13

Bangalore and Punjab will lock horns in Match 60 in Indian T20 League 2022. It will certainly be the key fixture for both teams for their playoffs spot. Bangalore has 7 wins in 12 league games and is at fourth position in the points table. In their last league match, they posted 192 and won by 67 runs against Hyderabad. The key players for them will be Wanindu Hasaranga and Faf du Plessis. On the other hand, Punjab has 5 wins in the same appearances as their opponents and is eighth in the table. They failed to defend their score of 189 in the last game against Rajasthan. The likes of Shikhar Dhawan and Kagiso Rabada are their best performers.

Best economical pick – Liam Livingstone has shown why he is regarded as one of the best batters in franchise cricket. Livingstone has made 315 runs in 11 matches at an average of 31.50 and a strike rate of 184.21.

Top captains & vice captains – Shikhar Dhawan has scored 2 half-centuries in the last 5 matches in the tournament for Punjab Kings. He has scored 381 runs in 11 matches at an average of 42.33 and a strike rate of 122.11. Dhawan is the highest run-scorer for PBKS this season. Faf du Plessis is the current leading run-scorer for Royal Challengers Bangalore this season. He made unbeaten 73 runs off 50 deliveries in the last game against Sunrisers Hyderabad. Du Plessis would be expected to play a similar innings in this game.

Smart pick – Wanidu Hasaranga achieved his best bowling figures in the T20s during the last game against Sunrisers Hyderabad. He picked 5 wickets for 18 runs in that match and won the Player of the Match award. Hasaranga is the most successful bowler for RCB this season and has taken 21 wickets at an average of 15.33.

Cautious Pick – Rishi Dhawan has taken 4 wickets this season and has got an opportunity to bat in only 2 matches. You can avoid him in your fantasy team for this match.