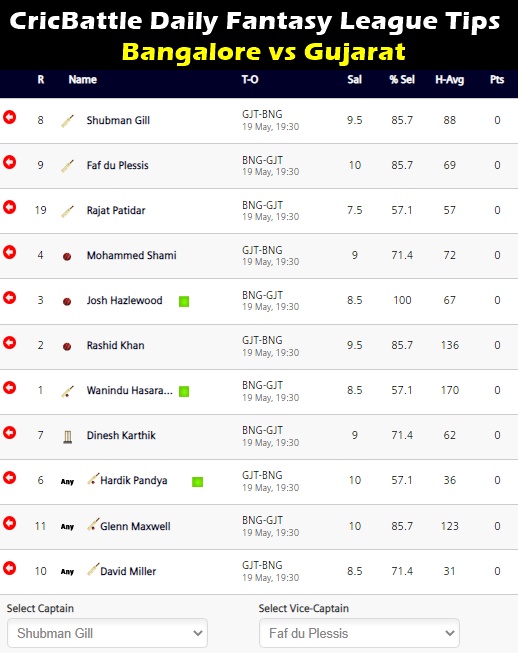 Bangalore vs Gujarat on May 19

RCB is set to take on the Gujarat Titans in their next encounter at the Wankhede Stadium. The Faf du Plessis-led side was hammered in their previous game against the Punjab Kings and it has taken a big toll on their net run rate as well.  With seven wins in 13 games, a victory might just not be enough for the RCB side and their fate still doesn’t lie in their hands with other results affecting scenarios. On the other hand, Gujarat Titans have been the team to beat so far in the tournament and have qualified for the playoffs already with 10 wins in 13 games. However, with the playoffs approaching, the Hardik Pandya-led side would be looking to keep the winning momentum going as well. The form of Wriddhiman Saha has been a great boost to the side after his scintillating knock in the previous game.

Best economical pick – In the last 4 out of 5 matches, Rajat Patidar has made two 40+ scores including a half-century against Gujarat Titans only. He added 99 runs for the second wicket along with Virat Kohli in that match.

Top captains & vice captains – Shubman Gill has played a vital role at the top of the order for the Gujarat Titans throughout the season and is sixth in the race for the orange cap as well with 402 runs in 13 games. He has made some tough runs for the side and will be looking to go into the playoffs with a good knock which can act as a confidence booster. Faf du Plessis has been the run machine for the team since the beginning of the tournament. Apart from a few matches, he has scored runs on a consistent basis. Du Plessis would be expected to be at his best in this important game.

Smart pick – Mohammed Shami has been one of the standout bowlers of the tournament and he bowled an amazing spell in the previous game as well against Chennai Super Kings. The right-arm quick has been brilliant with the new ball and finished with 2 for 19 in the previous game with an extraordinary delivery to remove in-form batter, Devon Conway.

Cautious Pick – Mahipal Lomror has played 4 matches for RCB this season and is batting in the lower middle-order. You can avoid him in your fantasy team for this match.