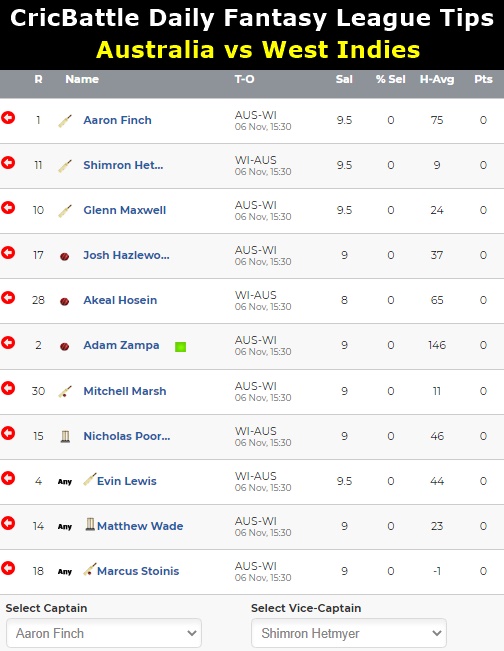 Australia vs West Indies on November 6

Australia and West Indies will lock horns with each other for the Match 38 of the World T20 Cup. The former outplayed Bangladesh completely in their previous game. The team restricted the Tigers for just 73 runs and won the match by eight wickets. Heading into this match the Aaron Finch-led side will be keen to register another victory to grab two important points. West Indies, on the other hand, has had a dismaying outing in the tournament so far. The team has secured just 1 victory from four matches they have played. The team will look forward to punching above their weights to secure a win in this game and ending their campaign on a positive note.

Best economical pick – Akeal Hosein has been one of the more consistent players for the West Indies in this tournament. He is an extremely good fielder, something which we have seen in this tournament already. Hosein has also picked up four wickets in as many matches of this tournament. In the last game, he wasn’t used properly because there were too many left-handed batters in the Sri Lankan team. Against Australia, he will be used extensively against the middle order, because all of them are right-handers. This is a good reason why he could get some success as well.

Top captains & vice captains – Aaron Finch is one of the most pivotal players on the side. In the last two matches, he has looked pretty impressive with the willow. He will be determined to take the momentum further for the side. Shimron Hetmyer played an impressive unbeaten knock of 81 runs. His innings included eight fours and four sixes. He will aim to make an impact for the side in their last match of the tournament.

Smart pick – Ever since his stint with the Chennai Super Kings, Josh Hazelwood seems to have a better understanding and game plan for T20 cricket. He has been exceptional in this tournament, barring one game against England. He has picked up four wickets in four games and also had a good series in the Caribbean earlier this year. All these factors make him a good solid pick for this contest.

Cautious Pick – Chris Gayle is struggling to score runs in this World Cup. He has scored only 30 runs in this tournament. It’s better to avoid him while making your fantasy teams.