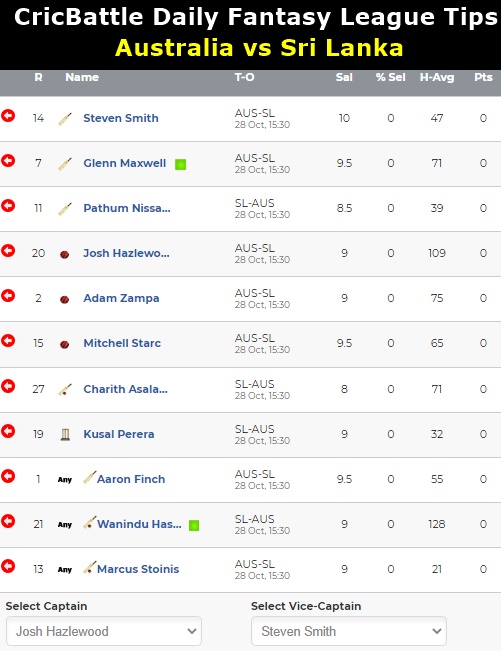 Australia vs Sri Lanka on October 28

Australia will face Sri Lanka in the Group 1 contest of the T20 World Cup 2021 on Thursday. Australia had to work really hard to secure a victory against South Africa in their opening encounter. A 40-run unbeaten stand between Marcus Stoinis and wicketkeeper Matthew Wade helped them to gain a 5-wicket victory, with 2 balls to spare. There is no question on the abilities of their bowling attack, but the top-order batters need to be more responsible in the upcoming matches. Sri Lanka, on the other hand, defeated the Bangla tigers in their last game and clinched a 5-wicket victory with 7 balls still left in the match. This was their fourth straight victory in this World Cup. Half-centuries from Charith Asalanka and Bhanuka Rajapaksa steered them home. They have got depth in their bowling attack and have the potential to beat Australia, if they play to their strengths.

Best economical pick – Charith Asalanka was instrumental with the bat for Sri Lanka against Bangladesh. He was the player of the match for his splendid unbeaten knock of 80* runs from 49 balls, which included 5 fours and 5 sixes.

Top captains & vice captains – Josh Hazlewood’s stint with Chennai Super Kings in the IPL has helped him a lot to prepare himself for this event. He was the player of the match in the last game against South Africa for his phenomenal bowling performances, where he picked up 2 wickets by conceding just 19 runs in his full quota of 4 overs. Steven Smith was cruising well in the last game against South Africa. He was dismissed by a breathtaking catch by Aiden Markram in the wide long-on region, when he was batting on 35 runs. He knows how to pace his inning, according to the demand of the situation.

Smart pick – Wanindu Hasaranga is the main man for Sri Lanka with both bat and ball. He didn’t have the greatest of matches against Bangladesh, but he still is a must pick for your fantasy teams.

Cautious Pick – Considering there is a lot of competition in the all-rounders’ slot, it’s better to avoid Dasun Shanaka while making your fantasy teams.