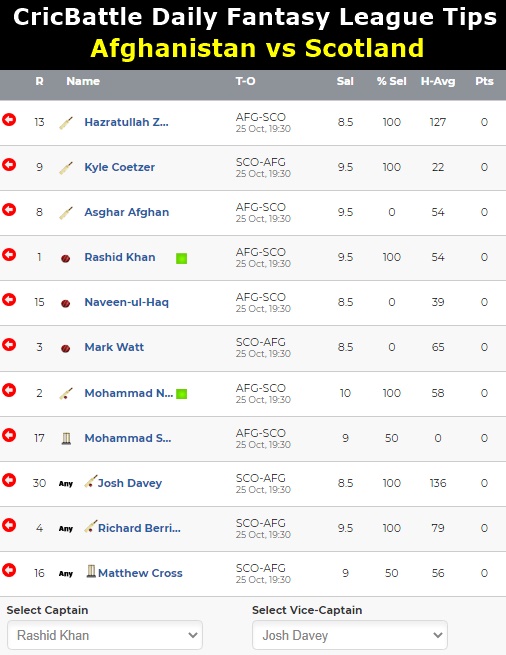 Afghanistan vs Scotland on October 25

Afghanistan and Scotland will lock horns with each other in match 17 of the World T20 Cup. The former lost their first warm-up match against South Africa. However, they bounced back to secure victory against West Indies in the next game. The Afghans have some strong bowling options and a bit more consistency from their batters will make them one of the stronger contenders of the tournament. Scotland, on the other hand, have had an impressive run in the tournament so far. They won all of their three matches and topped their group to make it to Super 12s. They would have their spirits high, entering into this game.

Best economical pick – Naveen-ul-Haq has added some new dimensions to Afghanistan’s bowling. He has the ability to disturb the batters with his slower balls and yorkers at the death. The team will pin their hopes on him to deliver in the mega event.

Top captains & vice captains – Rashid Khan has been one of the most pivotal cogs of team Afghanistan’s wheel. His contributions to the side in the mega event will be crucial. He can be a good player to bank on for this match. Josh Davey picked up three wickets in the previous game against Oman. He has been exceptional for the side in the tournament. He can be a good pick for this match.

Smart pick – Mohammad Nabi comes into the tournament with high expectations, both as an all-rounder and a leader. The veteran all-rounder has a heap of experience to fall back on and with him likely to bat higher up the order, Nabi should deliver some valuable fantasy points in this game.

Cautious Pick – George Munsey has blown hot and cold in the World Cup so far, his attacking prowess at the top of the order is one Scotland will be banking on dearly. With Munsey being due for a big knock in this tournament, he is surely one to keep an eye on in this game.