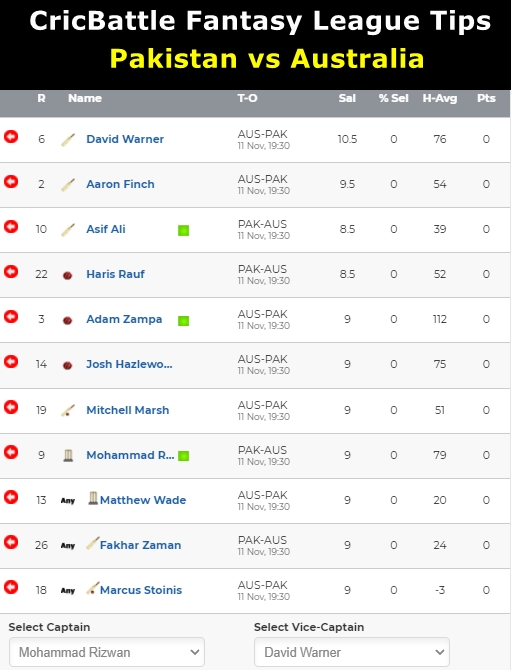 Pakistan vs Australia on November 11

Pakistan and Australia will lock horns in the semi-final of ICC T20 World Cup 2021. The match will take place on November 11 at Dubai International Cricket Stadium. While Australia qualified for semis from group 1, Pakistan qualified from group 2. Pakistan played 5 matches during the super 12 round of T20 World Cup 2021. They won all of their matches and finished on the top spot in group 2 points table with 10 points. In their opening game, Pakistan defeated India by 10 wickets. Later, they defeated New Zealand by 5 wickets. Pakistan also outplayed Afghanistan by 5 wickets and Namibia by 45 runs. In their last game of the super 12 round, they defeated Scotland by 72 runs. With 5 wins in 5 games so far, Pakistan are undefeated in the tournament. Talking about Australia, they finished on the 2nd spot in the group 2 points table after the super 12 round and qualified for semi-finals. Australia played 5 matches, winning 4 and losing 1. They managed to earn a better net run rate than South Africa, who also finished with 8 points. Australia defeated South Africa by 5 wickets in their opening match. Later, they defeated Sri Lanka by 7 wickets and Bangladesh by 8 wickets. They also defeated West Indies by 8 wickets. Australia’s only loss arrived against England, to whom they lost by 8 wickets.

Best economical pick – Not many people rated Haris Rauf before this tournament and if his numbers were anything to go by, he did blow hot and cold in his T20I career. However, he has been sensational in this World Cup. Such has been his effectiveness in the death overs that against India and New Zealand, he conceded only 23 runs in overs between16-20. There is little doubt that Australia will target him, but Rauf has emerged as a skillful bowler. He is rapid when he wants to crank it up, but then with the same arm speed his slower balls are well disguised and he becomes extremely difficult to go after.

Smart pick – Aaron Finch is a right-handed batsman from Australia who leads the team. He has smacked 130 runs in this tournament so far. He will be aiming to win the powerplay for his side with the bat.

Cautious Pick – Hasan Ali has been ineffective as the third seamer. Without doubt, Ali is an effervescent cricketer and has the talent to succeed at the top level. But it is a fact that the 27-year-old has failed to deliver for Pakistan in this World Cup. He went for 44 against India even though he claimed a couple of wickets. And he hasn’t shown a lot of improvement in the other games either.