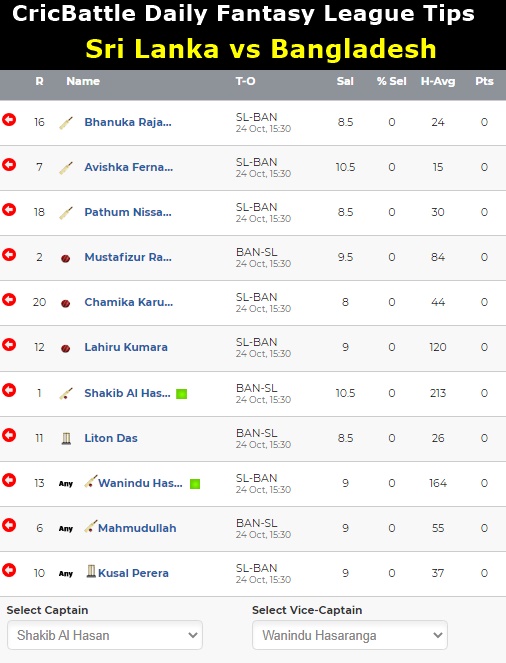 Sri Lanka vs Bangladesh on October 24

Sri Lanka and Bangladesh will take on each other in the 15th match of the T20 World Cup 2021. Both sides earned qualification into Super 12 stage after doing well in the first round. Sri Lanka’s journey was too smooth, as they won all of their matches in Group A and topped the table with 6 points. Maheesh Theekshana is doubtful for this match due to side strain. Bangladesh, on the other hand, too had to cross the qualifiers round in order to cement their place in the Super 12. Surprisingly, they had lost to Scotland in their first game, but then recovered well and won their next 2 matches quite comfortably against Oman and PNG. Both sides are in excellent form and we can expect a cracker of a contest between the sides.

Best economical pick – Bhanuka Rajapaksa will strengthen the Sri Lankan middle order. In 2 innings in this World Cup, he has scored 43 runs at an average of 43. He is an economical pick for your fantasy teams.

Top captains & vice captains – One can’t keep Shakib Al Hasan away from the game. He has the happy knack of picking up crucial wickets and knows how to score runs as well. In 3 matches in this World Cup, he has scored 108 runs and has also scalped 9 wickets at an economy of 4.5. Wanindu Hasaranga is Sri Lanka’s frontline all-rounder, who has been in exceptional form with both bat and ball. In 3 matches in this World Cup, he has picked up 6 wickets and has also scored 71 runs.

Smart pick – Mahmudullah played a captain’s inning in the last match against PNG, where he bought up his sixth T20I half-century. In 3 matches in this World Cup, he has scored 90 runs at an average of 30 and a strike rate of 150.

Cautious Pick – Nurul Hasan has scored only 5 runs in the last 3 matches. Considering his present form, it’s better to avoid him while making your fantasy teams.