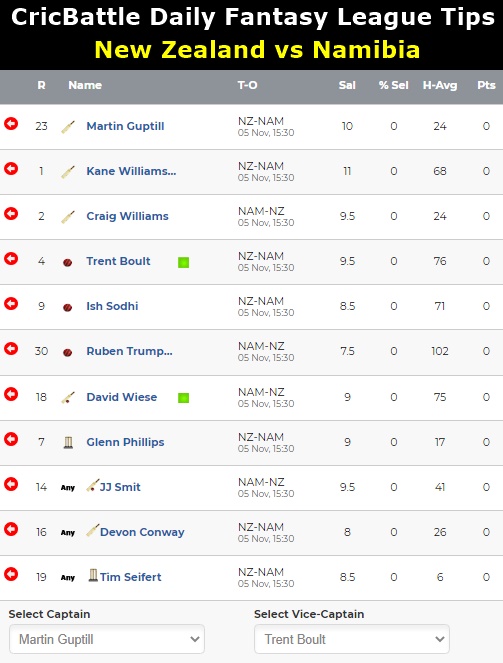 New Zealand vs Namibia on November 5

New Zealand and Namibia will battle it out against each other in match 36 of the World T20 Cup. The former though lost their opening fixture to Pakistan, but they bounced back stronger to secure back-to-back victories against India and Scotland. The Kane Williamson-led side will aim to secure another win in order to fancy their chances of making it to the semi-finals. Namibia, on the other hand, has won only one game in the Super 12s. They secured victory against Scotland by four wickets. They then lost both their next fixtures against Afghanistan and Pakistan. Heading into this match, they will look to punch above their weights in order to secure victory.

Best economical pick – Ish Sodhi has been instrumental for the side in the tournament. He has chimed in with crucial wickets and has bowled economical spells. He will be determined to put up a good show at the display.

Top captains & vice captains – Martin Guptill played a belligerent inning of 93 runs in the previous game. His contributions at the top order will be pivotal for the side. Guptill can be the other good pick for this game. Trent Boult is one of the key players of the Black Caps. In the match against India, he scalped three wickets. He continued his momentum further to pick two wickets against Scotland.

Smart pick – David Wiese was impressive with both bat and ball against Pakistan. He bowled some serious line and lengths against the likes of Mohammad Rizwan and got rid of Babar Azam in the end. He remained unbeaten on 43 runs from 31 balls.

Cautious Pick – Jimmy Neesham hasn’t got many opportunities to bat in this World Cup and he has bowled only 3 overs so far. It’s better to avoid him while making your fantasy teams.