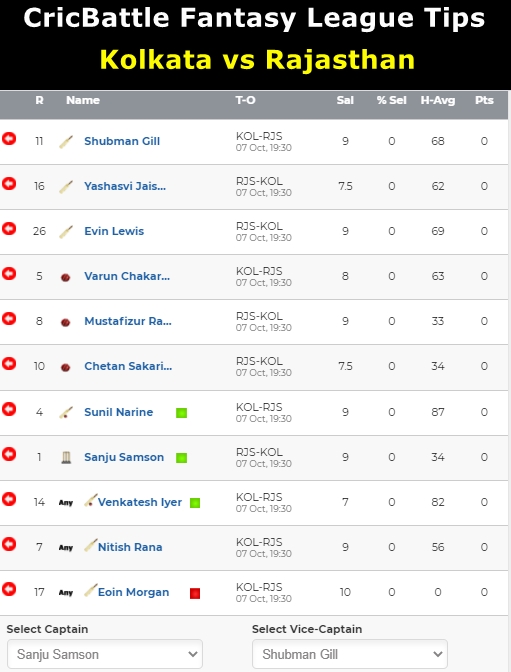 Kolkata vs Rajasthan on October 7

Kolkata Knight Riders will be up against Rajasthan Royals in the 54th match of the IPL. This will be the final league game in this edition’s IPL for both teams. Knight Riders must win this match in order to keep their playoffs hopes alive. On a positive note, their net run-rate is better than Mumbai Indians at the moment, but they wouldn’t want to depend on other teams’ results. With 6 wins and 7 losses, Eoin Morgan and his men are currently placed at the fourth spot in the standings with 12 points. Rajasthan Royals, on the other hand, are almost out of the tournament, since they lost to Mumbai Indians in their previous encounter by 8 wickets with 70 balls still left in the match. The chances of them qualifying are very slim, their net run-rate is way too low as compared to that of MI, PBKS or KKR. They still would want to give their best in this match.

Best economical pick – Yashasvi Jaiswal is a young talent who has improved a lot this year. In 9 matches in this tournament, he has scored 249 runs at an average of 27.66. You can take a risk and pick him in your fantasy team.

Top captains & vice captains – Sanju Samson had a great journey in this year’s IPL. He has mustered 483 runs in 13 matches at an average of 43.9. Samson would want to end the tournament with a good knock. Shubman Gill played a sensible knock of 57 runs from 51 deliveries in the last match against Sunrisers Hyderabad, and he was awarded as the player of the match for his impressive batting display under tough circumstances.

Smart pick – Evin Lewis is a dangerous customer at the top of the order. In 5 matches in this year’s IPL, he has scored 151 runs at an average of 30.2, with the highest score of 58.

Cautious Pick – Over the years, Dinesh Karthik’s role in white-ball cricket has changed. Nowadays, he seems to only come out to bat towards the latter half of the innings. He has been tasked to finish the game and play as someone who can score quickly in the death overs. This is no secret. Now, what that does is reduces the chances of him going on and get a big score for himself. This means that he can’t get a lot of fantasy points under his belt.