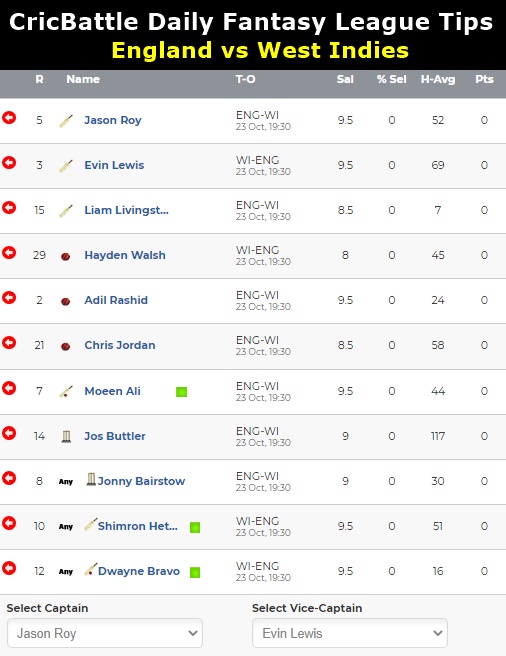 England vs West Indies on October 23

England will take on defending champions West Indies in the 14th match of the T20 World Cup 2021 on Saturday. It’s a repeat match of the 2016 T20 World Cup final and England will have revenge on their mind. Jos Buttler looks in great shape at the moment and his role will be crucial for Three Lions at the top of the order. Eoin Morgan’s form is a bit concern for the team management, and he will be hopeful of delivering well in this World Cup. Holding the tag of two-time T20 World Cup Champions, West Indies are in a spot of bother at the moment, having lost their warm-up matches against Pakistan and Afghanistan. They have got real match winners in every spot and should know how to bounce back. It will be interesting to find out who wins the battle between 50-over champions and 20-over champions.

Best economical pick – Hayden Walsh Jr impressed everyone with his bowling skills in the T20I series against Australia on home soil. He has scalped 23 wickets in his 26 T20Is at an economy of 7.59, while Walsh a decent batter down the order too.

Top captains & vice captains – Jason Roy has got immense power at his disposal and can smack the ball out of the park. His recent IPL experience in the UAE conditions would have helped him a lot. Evin Lewis did quite well in the second leg of IPL for Rajasthan Royals, where he managed to score a sensational half-century. He has scored 1318 runs in his 45 T20Is at an average of 32.14.

Smart pick – Moeen Ali had an excellent stint with Chennai Super Kings in the IPL. His role will be different here, as he will be playing down the order and will serve as the fifth bowling option for his side.

Cautious Pick – Going with his current run of form, it’s better to avoid Eoin Morgan while making your fantasy teams.