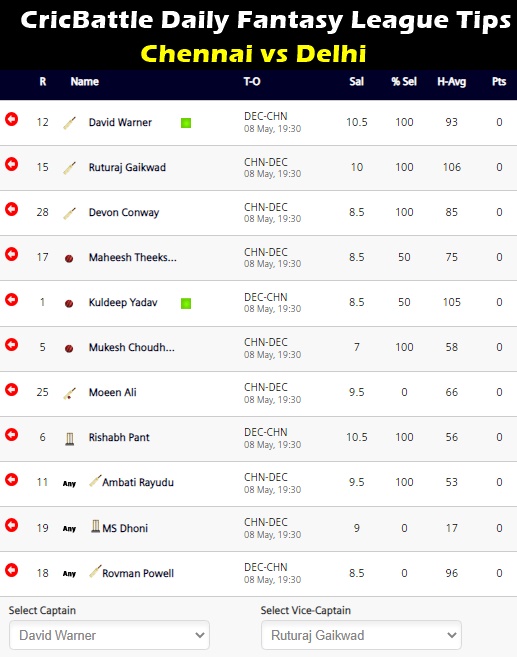 Chennai vs Delhi on May 8

Chennai Super Kings will take on the Delhi Capitals in their next encounter at the Dr. DY Patil Sports Academy in Navi Mumbai. The return of MS Dhoni as the skipper of CSK could not change the fortunes much and they are out of the race for the playoffs after the loss in the previous game. However, they will still be looking to end up high in the points table which will be a confidence booster for them going into the next edition. On the other hand, the Delhi Capitals produced a sublime performance against the Sunrisers Hyderabad in their previous game and managed to pull off a win despite big guns like Prithvi Shaw and Axar Patel suffering niggles. The return of Anrich Nortje will also be an addition as he has some serious pace in the armoury and he is likely to hold on to his place. It will be interesting to see if Shaw and Patel are fit for the game as they will then come in straightaway into the playing XI.

Best economical pick– Devon Conway has played two good knocks in the last two games for the Chennai Super Kings and he certainly is a big plus in the CSK set-up for the coming years. The New Zealand batter can keep wickets as well and has already scored 144 in three games so far in this edition. He is one of the quality players going around at the moment and will be looking to continue his good form.

Top captains & vice captains – David Warner wreaked havoc against his previous franchise SRH in the last match. The pocket dynamite scored 92 runs in just 58 balls and was also adjudged player of the match for his excellent knock. He will look to emulate his performance with the bat again. After scoring a match-winning 99 against the Sunrisers Hyderabad, Ruturaj Gaikwad scored a 23-ball 28 and was also involved in a 54-run stand along with Devon Conway against RCB. After two successful partnerships, CSK would be hoping that the duo would lay yet another solid foundation in the next game.

Smart pick – Maheesh Theekshana has been a revelation for the Chennai Super Kings this season and he has continually been among the wickets column. The mystery spinner has picked up 11 wickets in seven games so far this season and he has been excellent in any phase of the game. He is one of the trump cards for the skipper and his overs will be crucial to the plans of the CSK side.

Cautious Pick – Lalit Yadav has not been able to do well in both departments and can be avoided against this opposition.