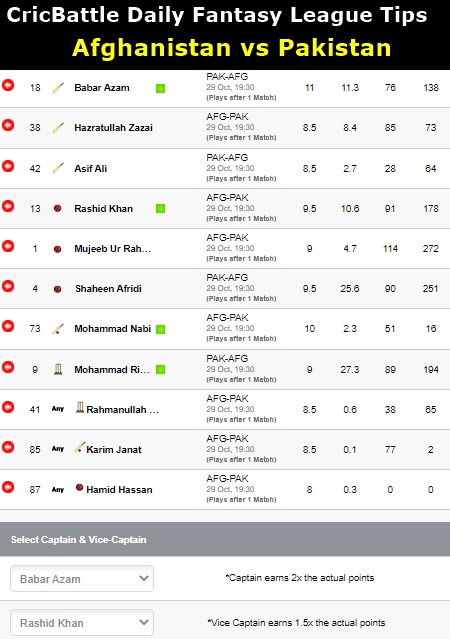 Afghanistan vs Pakistan on October 29

Pakistan is the team to beat in the ICC T20 World Cup by the look of things. They have beaten both India and New Zealand and are the favorites to come out of the group as the table-toppers. However, they face an equally impressive Afghanistan side that beat Scotland by 130 runs in their opening encounter. With two of the best bowling attacks featuring the likes of Shaheen Afridi and Rashid Khan taking centre-stage, a mouthwatering clash beckons in Dubai.

Best economical pick – Rahmanullah Gurbaz showed what he is capable of achieving in this format with a brilliant knock against Scotland. However, Pakistan is a different beast altogether. But given his comfort against quality pace and spin bowling, Gurbaz should get the nod over Mohammad Rizwan in your fantasy team, although both are fine options without a doubt.

Top captains & vice captains – Babar Azam had a rare failure against New Zealand, falling cheaply in a tight run-chase. However, the Pakistan skipper is known for his consistency in this format and one can expect him to find himself back amongst the runs against a strong Afghanistan bowling attack. Rashid Khan is undoubtedly one of the best spinners in the world and comes into the fixture on the back of a four-wicket haul against Scotland. With conditions likely to help him, one can expect Rashid to pick up a wicket or two and possibly score some quick runs lower down the order as well.

Smart pick – ICC No.2 T20I all-rounder Mohammad Nabi is well known for his breathtaking batting in the death overs and also his disciplined bowling in the initial and middle overs. He will be used as a slogger in the death overs with the willow and we can expect a good number of runs from his bat. Moreover, Nabi's miserly spells will be pretty useful for the Afghanistan team in clinching crucial phases of the game.